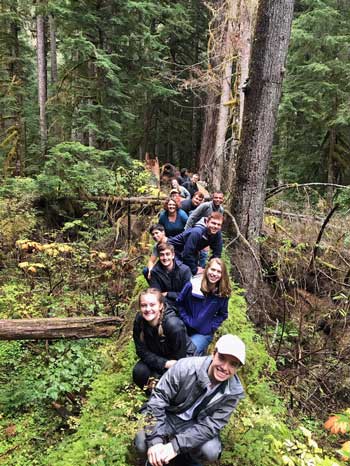 Viking Launch is designed to provide incoming freshmen a strong, focused start-up to college life at Western. Research demonstrates that freshmen are most apt to succeed when they are socially and academically integrated within a campus community, when they are prepared and ready for their courses, and when they attend classes with an eye to their future goals and plans. Viking Launch is designed to help students successfully achieve these advantages before fall classes begin.

This program is open to all incoming freshmen, but does not replace the need for incoming freshmen to attend one of the Fall Advising & Registration sessions (August sessions or September). We are currently planning for an “in-person” program, but will be monitoring COVID-19 numbers and following state-mandated health precautions as necessary.

Viking Launch students must select a room in either Fairhaven Residence Complex or Ridgeway Kappa in order to participate in the program, as these two halls open early specifically for Viking Launch. This will be a permanent assignment for the 2022/2023 academic year. Please see the Early Move-in/Housing page for details.

Viking Launch is open to all incoming Western freshmen, and there is no selection process - you just need to register for one (1) of the Viking Launch courses and pay the $500 registration fee.

There are several scholarships available to cover a portion of the cost for the Viking Launch program. Applications for the scholarships are evaluated primarily on demonstrated financial need.

Students interested in being considered for a Viking Launch scholarship should send an application essay to the following email address: vikinglaunch@wwu.edu.

The application essay should be one page, and provide the following information:

Scholarship applications will be evaluated on a rolling basis, but must be received by August 1 for consideration for the fall 2022 Viking Launch.

Cancellation requests must be received in writing via email to VikingLaunch@wwu.edu by September 2, 2022. Cancellation requests received by July 1, 2022, will be issued a refund, minus a $150 cancellation fee. No refunds will be given after July 1, 2022. A full refund is only granted if the program is cancelled. Because registration for this program includes registration for the course you selected, you must notify us of your cancellation before the program begins in order for us to withdraw you from the course so that you avoid receiving a failing grade for the course.

"Viking Launch was such a great experience and I would highly recommend it to incoming students because it's so nice getting to meet people early rather than struggle to meet people your first week of school."

"I met so many great people during that week that I had no fears as I started the academic year. We all felt so much better prepared than those who did not participate."

"This program was super useful getting settled into school and to learn the campus. Also getting two credits out of a week was amazing."

"I found Viking Launch to be extremely beneficial, especially because I am an out-of-state student. By choosing to attend this early-start program, I was able to familiarize myself with the foreign campus and city. I made friends with people who have similar interests and I learned a lot in my class. Being so far away from home is scary and I didn't know anyone before coming here, so the program really helped me to push forward and meet people; whereas, if I had waited until regular start, I may have been too scared or overwhelmed to take that leap."

"Viking Launch really helped me settle into Western because we got to move in early and see the campus before everyone else did. It felt really personal, and now going into my first quarter, I have amazing friends and a familiarity with Western overall."

Have questions about Viking Launch?

Please email us at VikingLaunch@wwu.edu and someone will get back to you.